By Tracy Hanes
As Andrea Galan-Nicholls, owner of West Star, winner of both the 2016 Governor General’s and Lieutenant Governor’s Cups, notes on her Facebook page, it all begins with a mare and a dream.

Galan-Nicholls of Beeton, Ontario has shown hunters and jumpers for years and was a confirmed “gelding person.” But after she saw a few breed shows, she started studying conformation and movement and thought about getting into breeding. After her mother Melissa died suddenly in 2010, she decided to buy a mare.

“A friend sent me an ad for a plain bay Canadian Sport Horse mare by the Hanoverian stallion Earl. I knew when I saw the picture, I had to have that horse,” she recalled.

She bred the mare Etoile (French for star) to the Hanoverian stallion Westporte in 2012 and a year later, West Star, a black filly, was foaled out on April 28, 2013 at Braecrest Farm, owned by her long-time friend Claire Hunter and her family. Galan-Nicholls gave the filly the barn name Mel, in honour of her late mother.

Galan-Nicholls had chosen Westporte based on his record as a successful hunter and his reputation for producing amateur-friendly offspring. Mel didn’t disappoint, inheriting her sire’s great hunter movement and temperament.

She didn’t show West Star as a foal but started taking her to shows as a yearling and two-year-old. She recruited her pal Claire to prepare the tall, elegant filly for the Cup classes as a three-year-old and West Star placed well at the qualifiers.

“She has always been a confident horse and thrives on the show ring experience,” said Galan-Nicholls. “I told Claire ‘I think this horse is going to do something special for both of us.’”

On the morning of the Cup classes at the Royal Agricultural Winter Fair, Galan-Nicholls was ringside at 5 a.m., watching West Star warm-up in the Ricoh Coliseum. “I already had goose bumps. She looked amazing and she was all business.”

A few hours later, Galan-Nicholls and Hunter had reason to celebrate as Cup judges Jan Greve from the Netherlands and Peter Stoeckl from Ontario pinned West Star at the top of each class (Cabella W, a Canadian Sport Horse by Cabardino owned by Hannah Ellingham, was second in both Cup classes). In the afternoon, West Star swept her classes to take the Grand Champion title at the Canadian Sport Horse show in the Horse Palace.

“She was impeccably built and she moved very well,” said Greve, while Stoeckl described her as “an elegant mare with a lot of quality.”

A 2016 colt Galan-Nicholls bred and sold in utero, Bandera du Stern WS by Banderas and out of Etoile, owned by Deanna Cubellis, also did her proud at the CSH show, taking fourth place in a large field of weanlings in the President’s Cup.

West Star is earning some well-earned down time before Galan-Nicholls starts her over fences with the intention of doing the baby green hunters in future. “She’s a quality mare and I always thought I’d keep her. We’ll see what we do but there’s no pressure to show her next spring.”

Galan-Nicholls, who calls her breeding venture West Star Sport Horses, has another potential Cup horse waiting in the wings for 2017: West Star’s full sister, Rayna. “She has big shoes to fill. She’s a little different type from her sister. Mel was the beauty pageant queen, this one’s more a tomboy.” 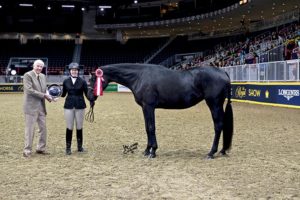 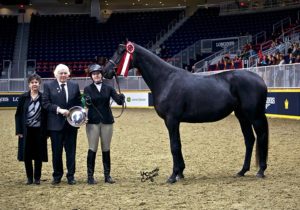 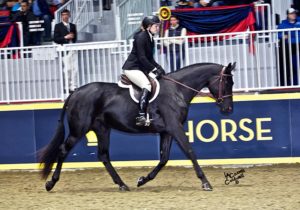